Song of the Blog:
“Father of air and Father of trees
Who dwells in our hearts and our memories
Father of minutes, Father of days
Father of whom we most solemnly praise”
- Bob Dylan

Today, 28th of June is my father's birthday - he passed away in May 1999. Both May and June are always months of reflection for me. It's one of the reasons I started doing #blogjune...  a sentimental journey to the past. For me the remaining bound volumes of EPPO (76-77), that made it to New Zealand years later, symbolise the bond with my father. He put all the EPPO (and Tintin) magazines in hardcover volumes for me. I wished I had more of them - not sure where they have ended up after all those years. But I am most happy to have at least three of them.

This week I also found out that MILTON GLASER passed away. Many people might never have heard of him - but he was a great graphic designer that besides some iconic logos, created some historic graphic artwork - like the image of Bob Dylan. Most people will be familiar with the famous I HEART NEW YORK logo - well, that was one of his creations. He was also responsible for one of the DC comics logos. One that many comic book fans would have somewhere in their collection.

A graphic designer doesn't often get credit for most of their work, unless you have read books about design or the history of a publication you wouldn't be aware of the origin of some of the icon masthead designs of magazines or even some book covers or posters. For instance,... It wasn't till I read the AMAZING book about the years of EPPO by Ger Apeldoorn (DE JAREN EPPO), that I realised the titles for the stories in the old EPPO magazines were created by Fred Julsing ( I HEART his work! ). 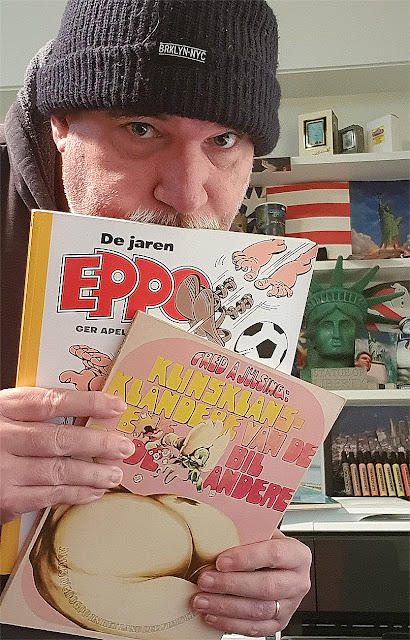