Song of the Blog:
“Waitin' for the soldier to come back again
Never more to be alone when the letter says
A soldier's coming home”
- The Dixie Chicks

The 27th of June is ARMED FORCES DAY. It was created to give everyone the opportunity to show their support and gratitude for those who are currently serving in the armed forces, and those who have done in the past. I was a soldier in the Dutch army, back in 1987 - but I thought it would be interesting to see what armed forces showed up on some of the earlier covers of EPPO magazine.

From Greek soldiers in the Stef Ardoba time travel story (that I absolutely LOVED) to the Roman army, that always seemed to loose the fight against Asterix and his fellow men. I guess the General (Generaal) was basically part of his own armed force, each time trying to take over the fort and then there was Beetle Baily (Flippie Flink in Dutch - don't ask me WHY) who showed another funnier side of American armed forces.

Back in 1977 another war-time story appeared in the pages of my beloved EPPO; " The Partisans" ( De Partizanen) drawn by Julio "Jules" Radilović. I was about ten at that time and the story never grabbed me, the whole war theme couldn't excite me as much as the stories of Storm, Franka etc. Later on in life I re-read some of the stories and even though they haven't got a high nostalgic value for me like some of the other series mentioned they are a good read and the artwork is amazing.

Oh - it's also SUNGLASSES day today,
but I covered that in last years #blogjune episode (here). 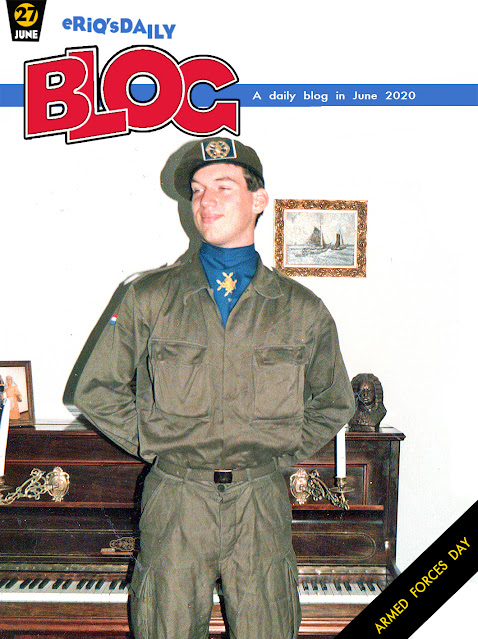