“Book burnings. Always the forerunners. Heralds of the stake, the ovens, the mass graves.”
- Geraldine Brook


Song of the Blog:
"Fires burn, heart beats strong,
Sing out loud, the chain gang song,
Never stop the action,
Keep it up, keep it up,"
- Grace Jones

I always wanted to be a cowboy, like a Dutch Lucky Luke ;)
In 1979, the year I reached the age of 12, I looked forward to reading the EPPO magazine every week. It was a time of relative innocence, a year of micro booklets, stickers, a free 'Roodbaard' book (that I have since lost) and some great comic book posters that covered my walls for many years.

One of the stories that year was by Dutch comic creator Dick Matena. He wrote and created this western comic called 'Dandy'; three stories were published in EPPO  (1979-1980).  I have always liked westerns, I even went double-denim, before that was a thing in the 80s.
When reading the Dandy comic about the slave rebellion in the EPPO (1979) the racial undertones and use of the word 'nigger' didn't register to a twelve year old as much as  it does now, when looking back at these pages. I guess in these times a comic like DANDY would never be made or published, especially in a magazine catering towards kids. 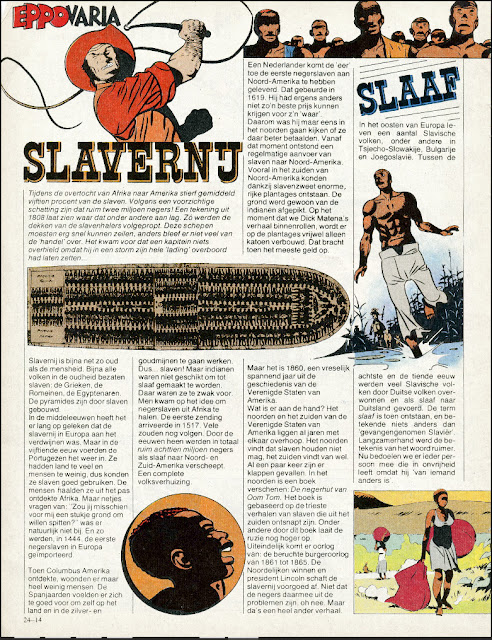 The main character is instrumental in helping the slaves escape to freedom, it now reminds me a bit of the movie 'Django unchained' by Quentin Tarantino. Shouldn't the medium of comics be used to send out a strong message against slavery? I guess overall it becomes questionable when certain offensive words get used and when the 'hero' of the story in the last frame gets away with 'BLACK FACE'.

When movies like GONE WITH THE WIND are taken down along with statues and other historical displays removed, we need to ask ourselves how far this will go. Changing street names - or even place names because the person they were named after, had a dark past.  Is it wrong to do so, or the right thing? Or should we ask the question; where do we stop? Maybe burning 'wrong' comic books in the middle of a public square is not the way to go? Shouldn't we be educating, instead of eradicating?