“Yesterday I was a dog. Today I'm a dog. Tomorrow I'll probably still be a dog.
Sigh! There's so little hope for advancement.”
- Charles M. Schulz

Song of the Blog:
“You ain't nothing but a hound dog
Crying all the time
Well, you ain't never caught a rabbit
And you ain't no friend of mine”
- Elvis

Today is TAKE YOUR DOG TO WORK DAY - well, I have no dog. Never did have one. Ever since I saw CUJO my fear of dogs intensified. Not to speak about the incident in the 80's - when a German Shepperd attacked me and ruined my new pants.So - I am just going to do a dog blog about dogs in comics. I looked at two years of dog-eared EPPO covers (77-78) and found that in 1977 there were only five covers that covered the canine variety - and.. three of those featured Dogmatix (in DUTCH is was IDEFIX )*... plus a small version of the dog from Franka.

Luckily Dutch dog lovers could wag their tails in joy the next year - because even though 1978 started with Dogmatix/Idefix* on the cover,  on the later ones EPPO's dog PINEUT was front and centre. The black and white, dotted dog even featured on some posters that year AND a whole EPPOVARIA was dedicated to DOGS! 1978, even though technically the year of the snake, truely became the year of the DOG (well - in the EPPO anyway). 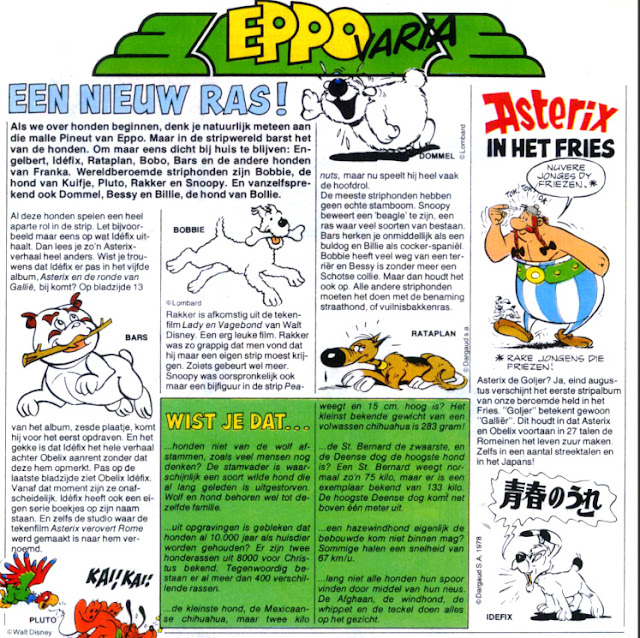 So - what is your favourite comic-book canine? Is it Snowy (from Tintin), Rataplan (from Lucky Luke) or maybe even Snoopy (from Peanuts) - Here in New Zealand it would be the dog from FOOTROT FLATS - without a doubt the most famous Kiwi dog in NZ comic book history. More about that in a later blog! WOOF!
*Asterix his dog
Posted by eRiQ at 11:57 AM