Song of the Blog:
"Someday they won't let you, now you must agree
The times they are a-telling and the changing isn't free
You've read it in the tea leaves, and the tracks are on TV
Beware the savage jaw of 1984"
- David Bowie

During the year of 1984, I somehow reached the age of 17 even though - after a few years of turmoil - it felt as if I had grown up way faster. You can read some more about my life in 1984 in an older blog. Many people have compared 2020 to 1984 - and I have seen COVID-19(84) mentioned online many times. During lock-down here in New Zealand I have been reading the trilogy '1Q84' - by Haruki Murakami.  Books and comics have always helped me through some of the more darker days.

At the moment there's a lot of darkness in the world - and I think as a society we need to focus some more on the positive things in life. Instead of destroying the things from the past that we just don't like, we should be learning from them. In one of the 1984 Eppo magazines, there's a story where Jerom is destroying a statue - I never really liked seeing JEROM as a comic in the EPPO back then - but now - years later - I look at it differently. Our views change over the years and hopefully our levels of respect grow along with it.

I now also have so much respect for Uco Egmond, who's character EPPO gave the name to the comic magazine I loved so much. Each week there was a new gag and often a cover drawing and there were also his adventures of
'Falco en Donjon' - Another comic book artist, Gerard Leever took over the titular character for a while and I loved it when EPPO started his own comics and later basically started to run his own Eppo magazine.

I also enjoyed it when I spotted the EPPO name in the backgrounds of other comic stories, like in GUUST FLATER. I have had fun going through some of the old 1984 Eppo magazines again and seeing so many familiar stories and movies. I still have the Ghostbusters poster - plus the STORM (Marduk) poster hangs in my office! 1984 wasn't too bad a year and as Martin Lodewijk put it in the last issue of Eppo that year: "Orwell that ends well." 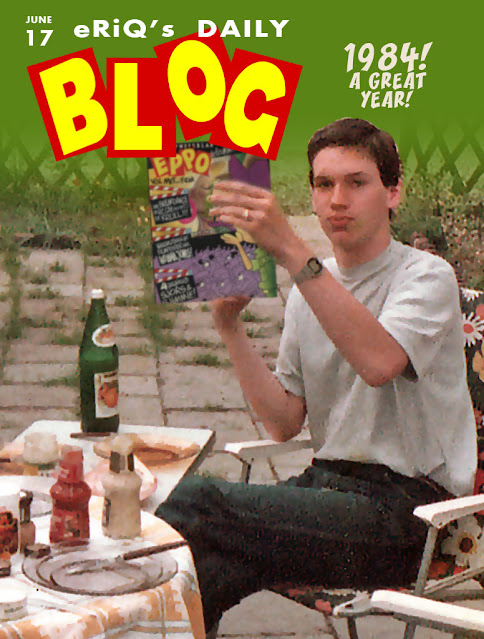