“Neighbour, what are you doing now?”
- Kees Flodder

Song of the Blog:
"All the old paintings on the tombs
They do the sand dance don't you know
If they move too quick (oh whey oh)
They're falling down like a domino"
- The Bangles

In 1986, the year in which I walked like an Egyptian, did my first illustrations for a computer booklet and wrote my first screenplay ( read all about it HERE:) for me it is also a reminder of the Dutch movie FLODDER. It was quite a year for Martin Lodewijk, the creator of the drawing on the Flodder poster. He had a couple of stories in the EPPO magazine ( the BLACK BOX was brilliant), even made it onto the cover and was still writing the script for STORM.

Another project he had worked on was the artwork for the chips line of SMITHS called TENGELS - I have been an empty chip bag collector for many many years and after seeing the advertisements in the EPPO magazine that year, that bag had to be added (and consumed).
(here's a link to my blog about my chips bag collection)

But, as I said at the start - at the end of 1985 I went to see FLODDER at the cinema with some friends. Afterwards we ended up at Cafe 2005 in The Hague, on the Denneweg; where we actually met Dick Matena!
Back in the 80's I used to cut out the movie poster ads from the newspaper, I still have quite a few of them in a box in the garage. Even some of the Flodder sequels. I have seen one of them, the one where they go to America, again Martin Lodewijk created the poster artwork. Nowadays movie posters can easily be found online, I was amazed by the amount of different language versions out there of Flodder! But - it's still nice to have a print version of the actual poster that was in the VERONICA magazine.

I have never seen the TV series or read any of the comic books, I did come across some of the panels Martin created of the film - if he had done the actual adaption I would have bought it for sure. I would probably even have bought an adaption of the Rambo movie if Martin Lodewijk had created it! 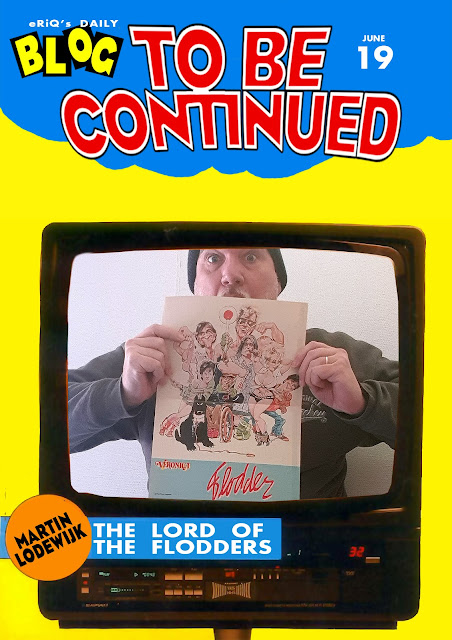 (Watch the trailer of FLODDER here)
--