“Life is about growth. People are not perfect when they're 21 years old. ”
- Bill Walton

Song of the Blog:
"'Now if you had prepared 20 years ago,
You wouldn't be a wandering now from door to door.
Why don't you do right, like some other men do?"
- Jessica Rabbit

In 1988 - fresh out of the army - the year I turned 21, there was a headline in one of the newspapers: Comic Magazines in trouble -  The article talks about the changes in the comic book magazine world, with pages being reduced and or being published bi-weekly. The Tintin magazine was even going to be published monthly. I had stopped getting that years before. The new look Eppo WV with its triple comic strip covers and comic frames blown up to poster format in the name of 'art' stopped me from being a fan. With the name change to 'SJORS AND SJIMMIE' it lost my interest completely - it had stopped being 'my EPPO'.

The article in the paper blamed the reduction of the amount of children in families and the fact that TV was entertaining kids, more than ever. I think probably a lot of readers like myself from the early days had grown up and were studying or had a job. I was doing both that year - working odd jobs in the holidays and the weekends ( mostly cleaning jobs) whilst during the week I went to an art academy. It was nice to get back into art and drawing - I just found a sketch the other day that I had drawn for one of my uncle's 50th birthday. Wow - to think I have passed that milestone myself THREE years ago! It's amazing how these little time-travelling blogs bring up memories from the past. 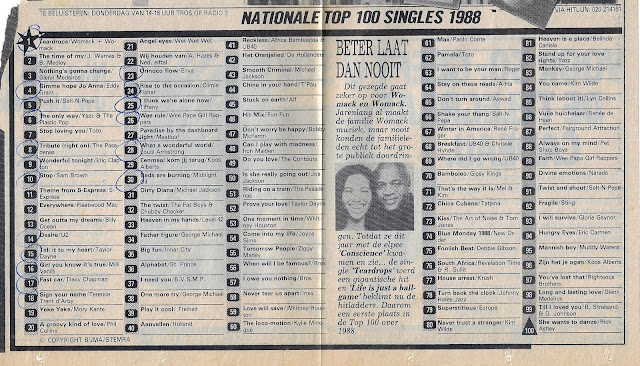 1988 was more a year of music than comics for me - Tracy Chapman's FAST CAR, Bobby McFerrrin's BE HAPPY. There was still some classic George Michael en Michael Jackson and who could forget the DIRTY DANCING soundtrack. Which brings us to movies - yes, I did see the movie and even (still) own the record! Nobody puts baby in the corner, right! But THE movie of 1988 for me, would have to be: WHO FRAMES ROGER RABBIT (and of course Die Hard). So without a doubt I had to buy the comic adaption that year - "The hunt for Roger Rabbit" drawn by the great Daan Jippes (who's mostly famous for his Disney work - and has been a major influence on many Dutch comic book artists). It's still a nice book to look at from time to time and the movie itself remains a true classic. I am surprised that I never bought the 'Sjors en Sjimmie' magazine with the movie on the cover.