“Sometimes I've believed as many as six impossible things before breakfast.”
―Lewis Carroll


Song of the Blog:
"Like Alice in Wonderland
The dream takes you by the hand
Inside emotions that you might not feel
If by some notion the dream was not real"
- Culture Club

Having lived through the last months with all the craziness and its 'new normal', has at times felt like a (bad) dream sequence. As if the whole world has tumbled into some warped wonderland of weirdness...

I was six years old when I first got introduced to Lewis Carroll's 'Alice in Wonderland' through the medium of comics. Inside it still has two of the addresses where I used to live. The top one written by my dad, the other stamped by me. This comic book from 1973 was illustrated by DANY - but on the cover it reads DALUC and TURBO.  It also has some additional artwork by Dupa, Turk and De Groot.  But it was DANY whose style I fell in love with. His stories about Olivier Rameau (Roze Bottel) and the people of 'Dreamland' marked the debut of Dany's first successful and longest running series. Dreamland is very similar to the worlds of L. Frank Baum's Oz and Lewis Carroll's Alice.  Dany drew this adaptation of Alice shortly after starting the Olivier Rameau series.

His books of JOKER (Harlekijn) scream to be made into a movie series (great scripts by Jean Van Hamme). And his version of Bernard Prince, in the book  (Le piège aux 100.000 dards) - "De val met de 100.000 spiesen" from 1980 reads like a movie on paper. A totally different direction from the dream-like stories of his other series. 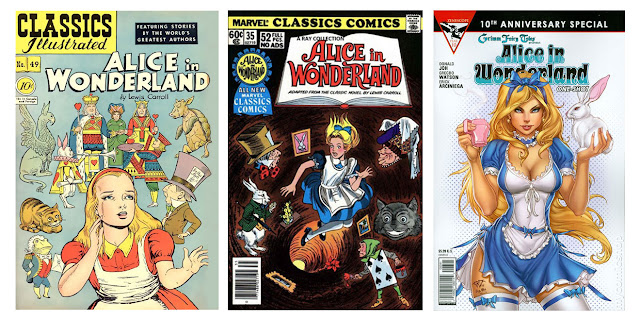 From Classics Illustrated, Marvel Classics Comics to the Grimm Fairy Tales, there have been MANY version of Alice over the years (most people are still predominantly familiar with Disney's animated and live-action film versions). For me however this book of Dany will forever be very impressionable. We also have a little 'Alice in Wonderland' corner in one of our display cabinets... with a copy of the original classic novel and some of the Disney characters -  as part of our little POP 'culture club'. But for me the face of Alice from the Dany comic will forever be with me, from when I was six years old.