“This is the third time; I hope good luck lies in odd numbers.
Away; go. They say there is divinity in odd numbers, either in nativity, chance, or death. ”
― William Shakespeare

Song of the Blog:
"This is a story about a girl named Lucky"
- Britney Spears

This was supposed to be the blog for the third day, but I was faster than my shadow and uploaded something from my phone that was topical for that day. The images for this one were on my tablet. Which then wouldn't let me upload pictures to the blog. Unlucky.
Anyway, another comic book series that I have great memories of reading when I was young would have to be Lucky Luke. The cowboy who shoots faster than his own shadow, that image at the end of each book always intrigued me.
In the last years I found out there is a Dutch Cosplayer, named Rutger Gret who has basically been living the life of Lucky Luke. Ba-da-bing...ba-da-BOOM.

He truly does make a great Lucky Luke and is often seen at comic book related events and expos. Rutger himself is a cartoonist as well and seeing his work has inspired me to get back to my own comic book project, one that has been dormant for a while.

Lucky Luke is still going strong as a comic after all those years, I haven't read many of the more recent books but lately I have picked up some of the ones from my own collection and enjoyed the old western adventures again.
One of my favourite books from the series has always been "western circus", here is the cover and the page it inspired. As you can see there's no more smoking on the cover for Mr.Luke! 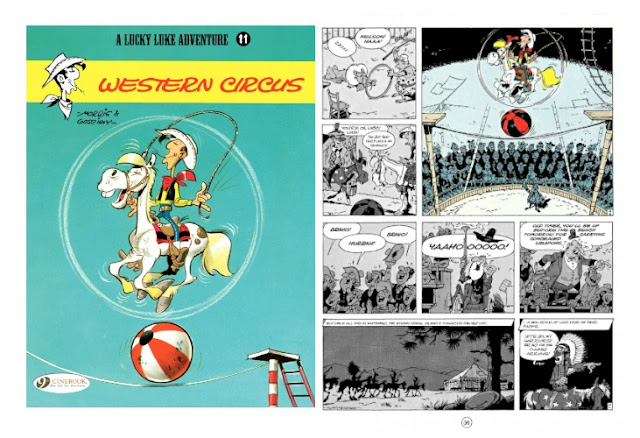