“The experience of reading a printed comic book will never change, but now, thanks to the digital age, there are many different ways to enjoy the same story.”
- Stan Lee

Song of the Blog:
“I know the route of craziness
A bunch of dots that's chasin' us
Frame by frame, to the extreme
One by one, we're making it fun”
- Aqua

In my bookcase I have a book called Strips by Kees de Bree, Rob van Eycks and Martin Wassington - it dates back to 1979 - but somehow I ended up getting it signed by someone.. but - I couldn't remember who it was or when. It must have been at some comic expo. After some digging in my brain, it would have been in 1985 - it was my birthday that weekend and I now realise the first drawing was by Eric De Rop... a Belgian comics artist, who worked for Willy Vandersteen's studio between 1970-1976 and 1984-2015. He inked series like  'Jerom' and 'Suske en Wiske' and 'Robert en Bertrand'. But the drawing of Jerom on the last page I just can't seem to make out the signature - someone will and clear up this mystery for me.

All in all it is a great book full of historical comic book information - there's even parts about de PEP and EPPO magazines - with an image of a scenario for THE PARTNERS by Dick Richards ( the pseudonym for... Dick Matena!) and drawn by Carry Brugman. I added the page from when it was first published in EPPO (1978-1979). I always thought this was a great series and it had so many cameos of famous actors etc as characters. I would love to see some of these stories made into a movie or series - hello NETFLIX - please check this out!!!

I love how the book has been drawn onto on both inside covers - so random - but a nice edition in my collection and I really like the image of Lucky Luke on the back as well. 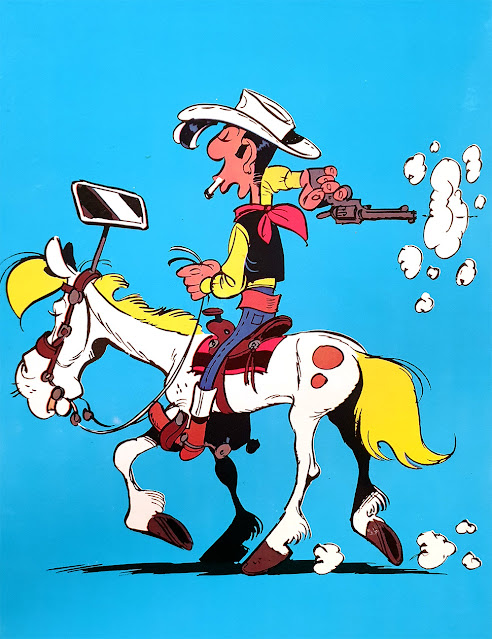