“If you write then you are reborn. Because by writing about the moment,
you can relive it for a second time.”
― Kamand Kojouri

Song of the Blog:
"Welcome to happy hour, blinkin' on the neon sign…"
- Ted Hawkins

A year has passed since I first participated in the BLOGJUNE project. So much has happened, books were written, poems created, photos taken. But it all seems like one big BLUR now.
This year, the whole world seems like a smudge, left behind by a viral frenzy. So, instead of focusing on all of that in these coming blogs… I have decided to just take an image from one of the comic books in my collection and write some words to go with it.
For a few years now, I have followed fellow blogger, Michael Minneboo (author of 'My friend, Spiderman), who in the Dutch comic magazine EPPO creates a regular column called "Onder de Loep" (A Closer Look) with a similar intention. I like the idea of showcasing parts from my youth, through these little graphic windows. 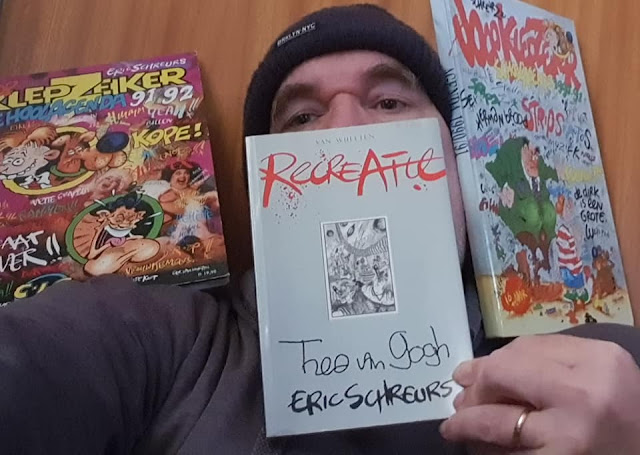 With the passing of Dutch comic book artist Eric Schreurs (61) this week, I decided to pick a frame from his body of work. Most of it is probably highly offensive these days, but as a teenage boy in the Netherlands his graphic style and over the top humour always seemed to hit the right spot.
His most famous character would have to be 'Joop Klepzeiker', a one page comic about a bit of a loser,  published in a weekly magazine before it got printed in a long line of bestselling books. But the frame I have picked is from a weird wild story (with no text) about Adrian Backfish. Most of those pages I really can't show, they are from a crazy Klepzeiker special book.

The short story shows a dark future with crazy characters, like this role reversal of Tintin and his dog Snowy and in the frame next to it, a special guest appearance by none other than the spectacular Spidey!
I like these sort of Easter eggs in comics, little pop culture nuggets waiting to be found. RIP Eric Schreurs - the Jeroen Bosch of Dutch Comics - the Crumb of Holland !

Come back to eRiQ's BloQ 2moro,
for a closer look at another frame from my comic book collection.
What a great place to be.


POEM OF THE DAY: