“At eighteen our convictions are hills from which we look; at forty-five they are caves in which we hide.”

In 1985, the year I became a 'man' of 18, I was still an avid comic book reader - and got the EPPO magazine every week even though I lived on a social security benefit whilst attempting to live on my own AND maintain to go to school. It was a year of many changes and even my beloved comic book magazine decided to become known as EPPO WORDT VERVOLGD (To be continued)...

I sure wasn't a bad year for comics... I always enjoyed the BRIAN and the BRAINBOX stories from Jan van Haasteren or just a bath joke ( bad joke ) from Gerald Leever ;) and even whilst my personal life at times felt like a water balloon had popped - the weekly adventures of my favourite heroes helped me continue every week in 1985.

There were some excellent covers of the General again in 1985 ( if you want to see more of Peter de Smet's work check out this great Facebook page by Ralph Brendt: "De Generaal en ander werk van Peter de Smet". I will be doing a bit about some of his other work myself in an upcoming blog. Of course I loved the FRANKA covers the most, as a big Henk Kuijpers fan - but THE cover of 1985 would have to be the first WORDT VERVOLGD one - with some of the images of Storm, Franka etc and Sjef van Oekel on top of it all. I did a vlog about that issue last year. I had deleted all my youtube videos since, but have uploaded this one again for the blog. 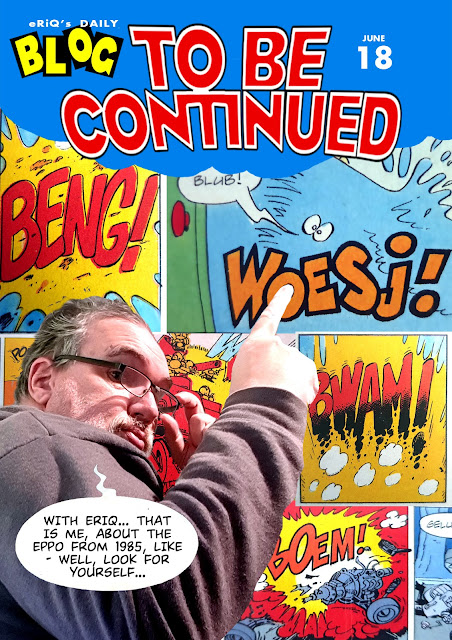