“Five people with passion can do better than fifty people with mere desire or interest.”
― Israelmore Ayivor

Song of the Blog:
"Roll up
To make a reservation
Roll up for the Mystery Tour"
- The Beatles 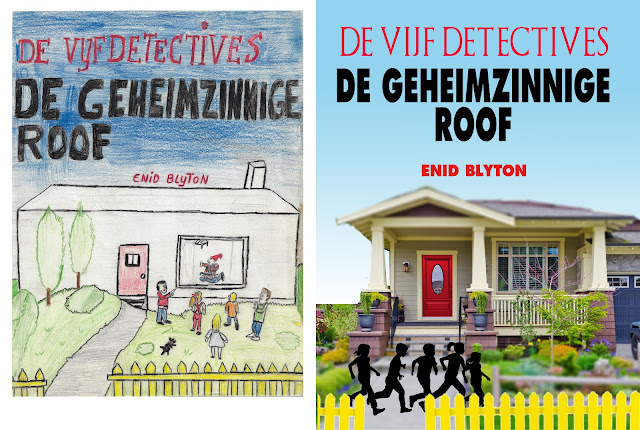 I have written about book covers before - I have designed a few over time for others and myself. I am in the middle of getting the cover ready for my second novel in the SHOCK trilogy, that I wrote during lockdown.
As I was looking through some old boxes of 'memories' I found an old drawing I made early 80's at high school.
I believe it was for a 'draw a book cover' competition -
I must have been reading a few Enid Blyton books at the time, as I picked one of her books. The drawing seems to be inspired by chapter 9 - "THE OLD MAN IN THE BUNGALOW".
Above is the scan of the original drawing, probably one of my first ever book covers! Next to it is an updated photoshop version that I quickly 'Frankensteined' together for this blog.

What I didn't know it that the English version of this book ( The Mystery of Holly Lane) actually dates back to 1953 and is in fact the eleventh book in Enid Blyton's Mystery Series featuring a group called the Five Find-Outers. In Dutch this was translated into the FIVE DETECTIVES: The mysterious robbery. It is amazing to see how many different covers were made for this book - these are just a few that I found online. 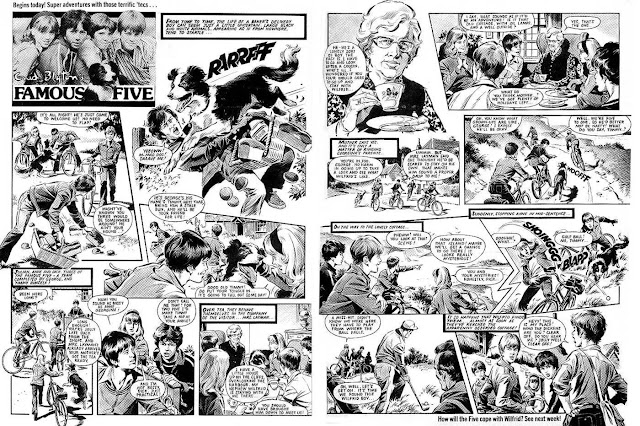 What I also found out is that these Five Find-Outers are actually not the same as the more well known FAMOUS FIVE. The Famous Five were even made into a comic series, first published in Look-In, drawn by Mike Noble. I remember his work from a magazine (Jamin Junior) that you could get at  the JAMIN candy store in Holland, which basically was the Dutch version of the LOOK-IN.  I would love to see some scanned versions of that magazine as I have fond memories of it. I remember the great covers, like the ones with FLORIS and LUCKY LUKE.

It's funny how these magazines recall vivid memories, but I can't even remember the story of the Enid Blyton book, nor any of the series or its cover. But I am sure I read quite a few of them - plus the ones about 'The Seven'. None of these have survived my many years on this planet. Maybe someone has them in their collection now, or they simply ended up in the rubbish? The mystery of the Enid Blyton books!