"The appeal of cinema lies in the fear of death. "
- Jim Morrison

Song of the Blog:
"In the dance halls and the cinema
Shame - On the TV and the media
Shame - We loved you"
- Eurythmics

During the year of 1983, my 'sweet' sixteenth, there were some memorable EPPO covers that have stayed with me for many years. One has always stood out for me - the issue that had the first episode of the new Franka story "The Dragon's Teeth". This book and its sequel have been an important part of my life.

The cover however had no connection with the first pages of story, we had to wait another couple of weeks before the cover fight was covered in the actual pages of EPPO; and what a fight - the action between the two characters takes place inside a small cinema and mimics a sequence that takes place on the screen behind them. Those pages of Franka have always been some of my favourites of all comics I have read. Classic Franka.
Recently I came across a comic that had a similar scene... great minds think alike, I guess...I also remember some articles a few years back that blamed Tom and Jerry for ISIS - as it showed children that violence is natural. Hmm... what about 'the news'?

In 1983  there were also some cool STAR WARS covers, a few STORM covers and a pretty awsome sequence of covers of THE GENERAL by Peter de Smet. But in the end there can be only one winner - the FRANKA cover... one of the few EPPOS that made it to New Zealand. 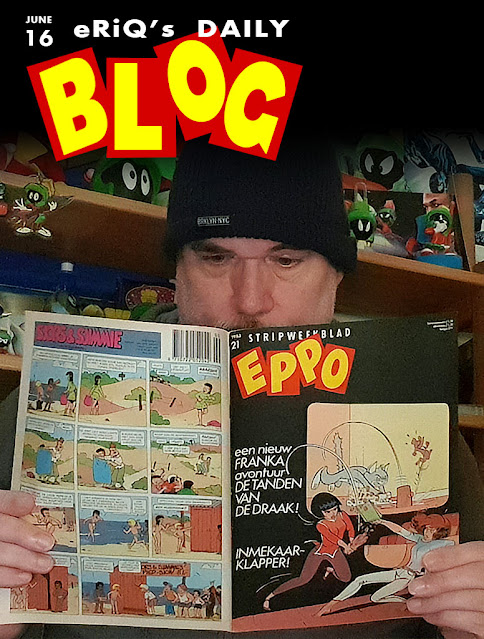