“I have always imagined that Paradise will be a kind of library.”
- Jorge Luis Borges

Song of the day:
"Everyday I write the book. Don't tell me you don't know the difference ... Between a lover and a fighter. With my pen and my electric typewriter"  -  Elvis Costello

Growing up my parental house was always filled with books. My dad's mother worked at a book depository and brought home a lot of books, that ended up in my father's impressive book case. I have ended up with a couple of them, but over the years build up my own personal library. My earliest memories are of my dad sitting in his comfortable chair with a STACK of books beside him. No wonder books and libraries always appealed to me. From the early days at primary school, getting books for projects, to the time when I first got my official youth library card. A new world opened up. 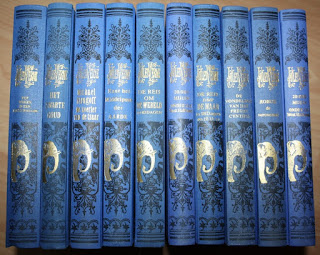 I remember my first books, devouring the complete blue hard cover series of Jules Verne amazing stories. My father was instrumental in convincing the librarians that I should be allowed to get an adult card in order to access the adult section (in those days, that part of the library was secluded from child entry). In my early teens I read A LOT of science fiction, Brian Aldiss, Greg Bear, Robert Heinlein and Jack Vance, to name a few.

The library often became my second home - with some of the issues that went on at in my life later on in the 80's. I would spend more and more time in this paradise of books.
In 1985, I would even get a summer job at the NBD (the Dutch Library Service) where all books came to be laminated and had their genre stickers added. I ended up with rolls of stickers that I personalised with my name! The money made went towards my Sweden trip.

Later on in life the library was pushed back a bit - Life got in the way. I found a card from the time I lived in Amsterdam, but have to real memories of the actual library. Moving to New Zealand in 1992, I had to seriously cut back my book collection but still ended up getting about 65 boxes (mainly books) shipped over. In the new country, there were new libraries, new books - and now EVERYTHING was in English. As a designer/illustrator/cartoonist back then libraries were the place to go for research. If I didn't have pictures of something in my fast personal archive, I soon found what I needed on one of the shelves.

When I lived in Tauranga,  I was asked to come up with an illustration for the youth library card. Pretty cool to check out books with a card that has your own drawings on it, (adults were able to pick my design as well).
With the internet become a larger part of life and getting a tablet, research and reading became more and more digital. Traveling into town had also become a nuisance, with the population of Tauranga growing rapidly and the infrastructure not quite coping with the influx of people. 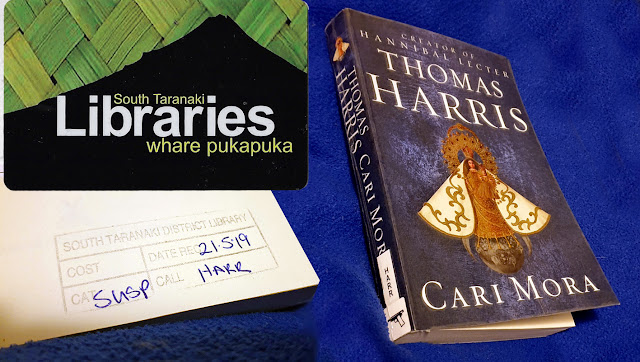 It wasn't till we moved to Taranaki, that a trip to the library was made and we signed up once again. We were SO impressed with all the services on offer, the extremely friendly staff, the fast variety of books (including comics!!), an online magazine reading service and they even have a 3D digital printer!!! Not to mention the amazing Comic Book day they organised  earlier this year!
My first four books are all great reads. I was very excited to find the latest novel by Thomas Harris (Cari Mora) still on the shelf. It's being read right now. I have found the library again - and look forward to more books in the future!

Check out the amazing Comic Book Day at the Library:
https://www.youtube.com/watch?v=Fo-ZDewWaj4&t=11s