Remembering the old days of Zorro. Amazing, when you realise this masked man made his debut in the 1919 novel "The Curse of Capistrano". That's 100 years ago! The character has since appeared in many films and several TV series, like the well-known Disney-produced Zorro series of 1957–59, starring Guy Williams. No - not the NZ comedian... It would have probably been THIS series that was shown on Dutch television when I was a little boy. Plus there was a comic strip version in the PEP magazine. 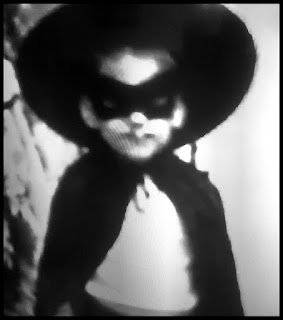 Of course, as a little boy back then, I wanted to BE Zorro and I clearly remembered my dad creating a black Zorro hat out of carton, making it possible for me to cosplay back in the early 70s. I didn't think there were any photos of me from that time, but out of the blue one of my cousins send me a screen grab from a very old film of myself donning the infamous mask and cape. This was many months ago and I was promised a copy of the video. Sadly family members don't always deliver on their promises and I am STILL waiting for the file to arrive in the Q-inbox.

Back in 2003, at a council Christmas party, I once again donned the black cape. This time influenced by the Antonio Banderas version. At the end of the Hollywood themed party, that had a lot of posters from my personal movie-poster collection on the wall, we all signed a large mexican sombrero (~Zorro eRiQ ~ ) - My son managed to get some photos taken in the outfit back at home, before it was returned the costume hire place.  Coincidentally, the son of Zorro is known as Don Q! Which actually is the name of my favourite brand of Vodka!
This year, as I was chatting to my friend in Florida, I mentioned how Zorro was Spanish for FOX (his surname). He had never known that for all of his life, even though he took some Spanish at high school.
Now that Disney has acquired Fox - it might remind them to bring back this "fox so cunning and free", who after all was the major inspiration for one other masked crusader. Yup.. BATMAN!