“The old believe everything; the middle-aged suspect everything;
the young know everything.” – Oscar Wilde

SONG OF THE DAY:
"Now, on the day I was born
The nurses all gathered 'round
And they gazed in wide wonder...
At the joy they had found"
- George Thorogood & The Destroyers

1983. The year I turned 16 wasn't as sweet as the saying/song makes it out to be. After my parent's divorce in 1982, my dad basically was a mess. He had taken to the bottle pretty badly, after my mum left, so I had decided to stay with him ("looking after him"). Resulting in my life being turned upside-down as well. Soon after, my dad did meet another woman.We even moved into her house giving me access to a NEW step-sister and brother (same age as me). Sadly once together, they soon had their own share of problems. It started with her children being taking in by her "crazy" ex-husband and the three of us having to move back into our old apartment. Quickly spiraling into more drinking and shouting and me being the target of all "her misery" etc.There were times when I had to get on my bicycle to look for my dad after he had threatened to kill himself. Only to locate him, drunk in one of the many pubs in the neighbourhood.

Things were often quite depressing and it makes you grow up pretty FAST as a 15-16 year old. There honestly were times when I wished I hadn't been born at all... suicidal ideas would pop up from time to time as seen in some of my doodles of that time. Spoiler: I am still alive! 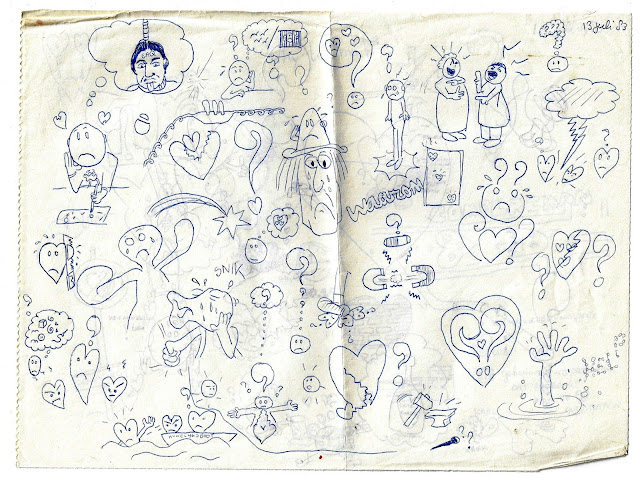 My school life had already suffered from everything in 1982... so, I had to do that year for a second time -yay- new classmates to deal with as well. This did free up some time, as I knew the most of the material already. Thus, in order to keep some form of sanity and sense of belonging, I had decided to join the school newspaper - my real first "job" as an art-director, designer and illustrator. We had a great team, creating fun memorable editions. We even made it into the local newspaper a few times.


There were also many movies and books that helped me get through it all. Especially the ones by Stephen King. Already having the same birthday as the master of the macabre made me feel linked to him. Any material that I could find was quickly devoured. That year Christine and Cujo were especially helpful, some make-believe horror to distract from having to deal with the real life "horror" of living along side two alcoholic destructive adults. I had stopped contact with my mother after she left us, but now all of a sudden she contacted me again and THIS caused even more problems with my dad and eventually got me kicked out of his house, with no place to live as a 16 year old...

I am still a big Stephen King fan. There's a wall and bookcase dedicated to him in my downstairs workroom/ library. There's even a little "Cujo dog" and a Christine die-cast.The Plymouth Fury, my favourite movie car (after the Delorean). So, even though most memories of 1983 weren't THAT sweet, some of the better ones have taken over as the real found joy, through these pop-culture icons that have become part of my life.
Posted by eRiQ at 11:25 AM