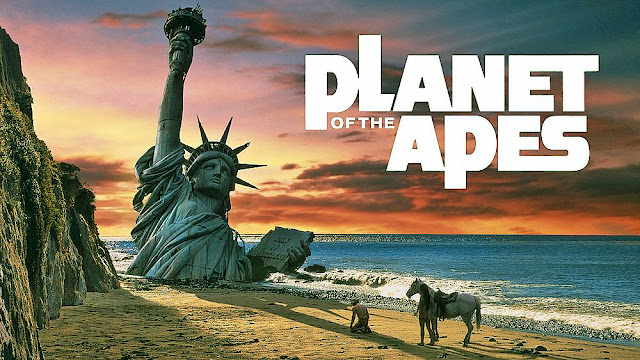 “If liberty means anything at all, it means the right to tell people
what they do not want to hear.” ― George Orwell

From an early age I've always been fascinated by the statue of Liberty. The first time I saw it, was when it was sticking out of the sand in the German spoken version of "Planet of the Apes." (Der Planet der Affen) That image, the surprise ending, that shocked many people at the time, has been cemented into my mind for eternity.


Ever since, I have collected pictures from magazines of the statue (at some stage I had them all on my wall as a kid) and each time it featured prominently in a movie it reached out to me. In "Ghostbusters II" the statue walks through the streets of New York, in "Cloverfield" the head gets thrown down the NY streets and for many years I had a postcard of the original "Escape from New York" movie poster on my wall.

Lady Liberty doesn't just have a cameo in movies - also in my other favourite medium (comics) there's plenty of appearances. On covers of Spider-man, Mad Magazine and more recently the latest Lucky Luke album. The latter is a GREAT story in which Luke comes across the French sculptor, Bartholdi, who’s touring the West with a strange sculpture: a colossal hand holding a torch. In fact, it’s part of the now famous Statue of Liberty, and Bartholdi is raising funds towards its construction and transport from France. Now wouldn't THAT make a GREAT movie? I know the adventures of Lucky Luke did get made as a french movie about ten years ago, but maybe America is now ready for its own version and THIS story would make a great introduction!

There was even a superhero named Lady Liberty, she was a member of Force of July, a team of agents working for the American Security Agency in the DC comic universe. She went through a few different versions over the years.

Funny enough, with my interest in the Statue, I have NEVER actually been to New York. I have seen a few blow-up versions in my day, found the smaller version in Paris (that I used to believe to be the smaller original!) and several LEGO versions in the Legoland theme-parks. One of these days I WILL get my hands on a Lego set that will let me build my own miniature version of the statue.

In my workroom I have an awesome plastic copy of her head, I believe it was from an X-men play-set and since recent days a cute smaller statue that friends send me after their trip to New York. What is it exactly that attracts me to my second favourite tall green lady? Is it the hope it gave people who came to America, to start a new life? Is it how she stands for liberty and justice? I guess all of the above. 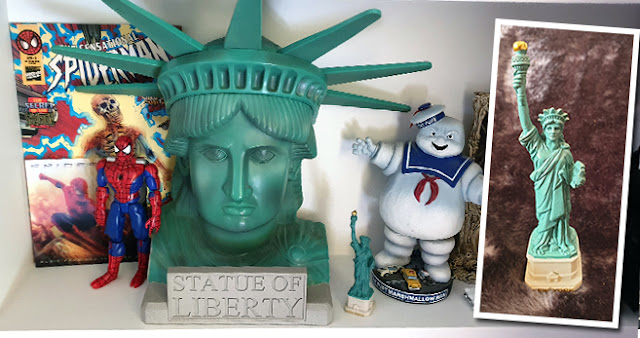