For me, blogging kinda started at an early age, I guess. When I was 7 years old at the Nicolaes Beets Primary school in the town of Rijswijk, Holland. The teacher would instruct us kids to write down our "adventures", so we could practice our handwriting and story telling skills from an early age.

To be fair ... Blogging comes from the word WEBlog - so, I guess it was just plain LOGGING. Keeping a log book of our earliest experiences as a child.

"Been to the city. We had "poffertjes" (Dutch Mini Pancakes) and after that we went to the fair."

The dutch word for FAIR is KERMIS - to me it has so much more meaning than the English version. It's more like large parts of the city turned into this cosy little theme park, With attractions - food stands and just a special atmosphere that as a kid makes an even bigger impression.

"I went into some kinda octopus attraction. When you go up and down it gives you a tummy ache. I also went into a place called Mickey Mouse, a mice city. In this mice city I saw Isaac. I saw Jeroen as well and Coby."

The entry ends with an illustration of the actual attractions. I googled and found an actual old photo of the "octopus" ride from that time. I do remember the city of mice, but was amazed to read back it was actually called Mickey Mouse. These days Disney would have jumped onto that with a giant copyright lawsuit. 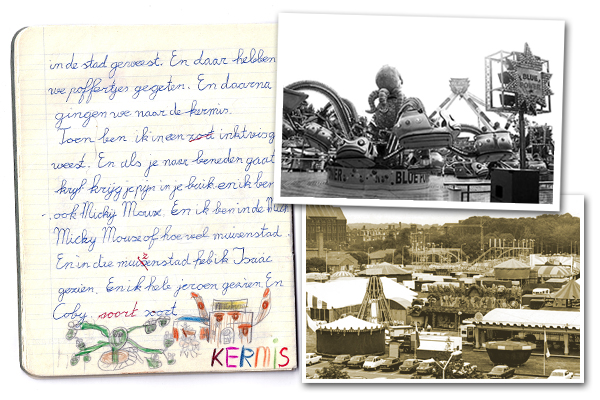 There are no photos of me at that age, at  any of these kinda events. Children these days have so much more to look back at later, with parents logging every step of their lives placing photos on social media. I sometimes think it isn't fair that a large chunk of my generation (and those before) have so little photographic memories of their younger years,
But than - having the ones we DO have including old notebooks, THEY make it all just so more special.
Posted by eRiQ at 10:57 AM