"Imagining something, is better than remembering something."
— John Irving (The World According to Garp)

Song of the day:
"I can't believe the news today
Oh, I can't close my eyes
And make it go away
How long? How long must we sing this song?" - U2

Just when you think the story of Mr. Q couldn't get any more complicated, the year of 1985 comes along. A year SO full of drama and adventures it needed SIX journals to fit it all in. We start the year, still living with my mother and her tiny balding bus-driving partner. The bus driver she had a sexual fling with on her holiday with her mum, the one she left my father for. Needless to say there never has been any love lost between the short angry old sport loving stamp collector and me. But, hey... I have tried many time over the years. Many... many times.


He would always complain to my mum, silly things he didn't like about me, like not specifically saying "Hello" to him as I came home from school. I would hear them argue from my room upstairs at night and find my mother in tears when he had left the next morning. It was bearable when he went on his bus trips, but once he started staying home regularly, things became more volatile. He always made it real clear that I wasn't a "real man", because I didn't like sport and was always reading and drawing. I "lived in a fantasy world"... Actually, his constant addiction to sport on TV has been one of the more concrete reasons for my dislike of the whole competitive side of sport. The thing is; I have no problem with people actually DOING sports. It's the fanatical way people choose sides and especially the aggression that manifested itself around soccer in Europe.

Sure I actually did create "my own fantasy world" in order to cope with, not only the stressful emotional time in the house at the time, but also the world at large. After all, 1985 was a year filled with the Heysel Stadium Disaster, Muslim gunmen capturing a TWA airliner, PLO terrorists hijacking a Italian cruise ship, Terrorists seizing an Egyptian Boeing 737 airliner, Greenpeace ship Rainbow Warrior sinking, the AIDS scare and... REAGAN. Reading comics helped me enormously during those times. Every week I would buy the dutch Tintin (Kuifje) and EPPO magazine. The adventures of Eppo, Sjors and Sjimmie, Storm and especially Franka were there for me to escape into every week

Anyway - there were several moments when things really clashed, with at one time even "throwing" the little fella (who came at me like an angry dwarf) on the floor during a heated argument. I am not a fighter, I don't even like confrontations, but sometimes you need to take a stand. It all came to the situation, where I guess both parties really had enough and I left their house a few days before going on a memorable trip to Sweden with my best friend Aiko. It had been made clear I wasn't welcome there after the holiday. Sweden was a good distraction. We camped at some great spots in nature, build dams in a river, spend rainy days reading GARP inside the tent and hitch-hiked to the other side of the country to stay with an old pen-pal, Lars Svensson, whom I sadly lost touch with over time. You try and Google that name - it's like the John Smith of Sweden! 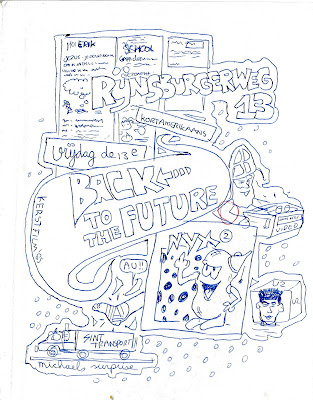 Returning back to Holland I had to sort out what to do next. I wasn't welcome at my father and his partner, nor was there a spot available at my mother's place. I still had to go to school and needed a place to live. To start off, I managed to get a room at this place in Leiden. Two awesome families that shared a house and helped young troubled people find some stability and in my case giving me the peace of mind to look for a room of my own, close to my high school. At that time I had just turned 18, one of the few kids in Holland that got a welfare allowance to pay for my rent and food, whilst still going to high school. Oh... by the way, there WERE fun things in 1985 as well. More great movies, more school newspapers and other suprises - but I will talk about them in the next blog!