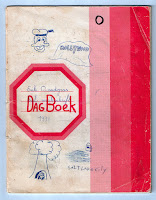 When I was nine years old I traveled with my wonderful grandmother to Canada and America. That year, 1977, is when I started my first ever journal. Since then I have kept regular hand written journals - sometimes with large gaps in between.  It is, however, such a joy to grab a volume and look back at 40+ years of memories. Places I have been to, people I have met. The good times, the bad times - pages filled with dreams and hopes - stories about friends and family.

Most of them are in Dutch, having grown up in Holland and only having moved to New Zealand in 1992. Some I have started to translate over time, but time is limited and do you spend some if it re-wording your life in English or focus on the "here and now" and write new chapters... 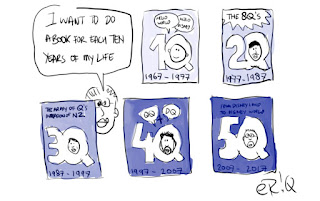 My passion project is to create a comic book version of my life.
To take these 50 years of memories and somehow condense them into five volumes, that cover 10 years of journals each. By the time I get to it there will probably be a 6th volume!

Never ever had I come across the hashtag "blogjune" before. So I got seriously intrigued by the shear mention of this literary movement on a tweet by Hawera librarian, Cath Sheard. A shard of information, shared on the last day of May. Was this just a thing for librarians? Had I stumbled onto a secret blog club, that prepared pieces of prose and/or poetry on personal computers each year. Were there any rules? Was this like "FightClub", with its first rule: "Never blog about #blogjune." I could not trace back any origin of the event.

On Twitter I did find someone called @seanfish, who started blogging many years ago and participated in the #blogjune phenomenon since 2011… So, for at least over 8 years, this blogfest had been slumbering online out of my direct sight. What else could have I been missing... is this a symptom of FOMO…  I was already late to the party known as #inktober. As a cartoonist/illustrator, it had been on my radar - but I didn't join in till last year. No more standing on the sideline, let's jump right into the deep and ride this wave from the first of June to Sunday the 30th. THIRTY days!

In the words of American documentary filmmaker, Morgan Spurlock, "Try something new for 30 days." Writing though, isn't something new to me. I have written stories and comic strips since primary school. I have worked for many publications, writing movie and gear reviews and other articles. Heck, I have kept some form of journal, visual and written (by hand and digital) for over 40 years. Sadly, last year I accidentally managed to delete seven years of digital journals, only then to find out my back-up had been corrupted as well. I wish some of that would have been blogged. Even JUST one month of each of these lost years… They would have been stored online, protected from sudden erasure.

Blogging itself isn't new to me either, I have started a few in the past. But with no reactions, no views, that soon became an dying art. There are some of my blogs out there in cyberspace that even I can't find and or don't remember the password for. Really, the new thing to try would be to keep this up, consistenly for a whole month.
I read somewhere that the ideal length for a blog post is 1600 words (about seven minutes of reading). I think 444 will be enough for my first attempt. I still need to resurrect one of the old blogs in order to upload this new endeavour.

The epic eRiQ blogging epos of 30 days of June...