Song of the day:
"Hey baby, are you having fun?
If you believed they put a man on the moon,
man on the moon..."
- REM
In one of my older #blogjune posts I mentioned the special Tintin book that belonged to my father (here is is) - within it are the two moon related albums, which today are topical again because it is 50 years since the moon landing. In 1969 the Apollo 11 lunar module, carrying Neil Armstrong, Buzz Aldrin and Michael Collins landed on the surface of the Moon; with Buzz and Armstrong walking on the moon seven hours later. I was one years old, nearly two - so I really can't remember anything. But I have however been fascinated with the moon and space travel from a very early age. I believe Tintin had a large role to play, having read his adventures about going to the moon. Plus the Jules Verne novel, "From the Earth to the Moon" that was the inspiration for the iconic image from "A Trip to the Moon" (a 1902 French adventure film by Georges Méliès).

The Classics Illustrated #144- "First Men In The Moon" was based on the H. G. Wells story. It's quite weird in its portrayal of the moon. With plant life, creatures and AIR ...and their vessel, some moon-like sphere is not the most exciting design, although - ET's space ship has a lot to answer for as well. 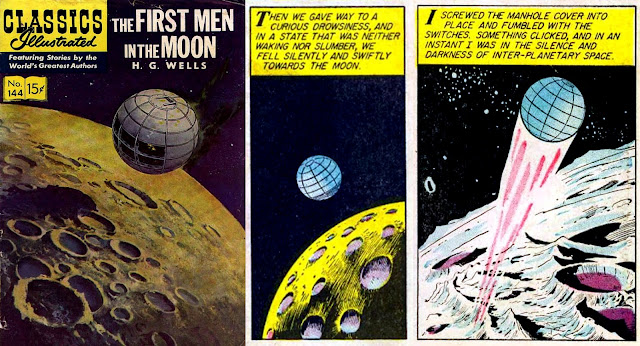 I came across an online image of an awesome French copy of "Destination Moon" (the Tintin book, not to be confused with the SF movie by George Pal). It has the following quotes from some of the atronauts with their autographs:

Buzz Aldrin: "First moonwalker after Tintin"
Alan Bean: "I might see footprints of Neil and Buzz but I am not sure about Tintin's".
James Lovell: "Houston, we've had a problem like Tintin."
Al Worden: "When returning from the moon, I took the farthest out space walk!! including Tintin's"
Charlie Duke: "The youngest man after Tintin to explore the moon"

I would still like to have a little rocket statue from Tintin for my collection, but for now I am really happy with the one of him, sitting on the rocks looking at the map from the same "Destination Moon" book. Oh, and look BEARS!!!